In Mexico, retailers often sell alcohol without checking the purchaser’s identification. This has led to high rates of selling alcohol to minors under the legal drinking age of 18.

In 2016, the Zacatecas City Pilot, in collaboration with Dichter & Neira (D&N), a company that conducts statistical research and analysis, began a Mystery Shopper program. D&N hired minors who, along with their parents’ signed consent, went into Modeloramas (ABI retailers in Mexico) and tried to buy a beer along with another item using a set amount of cash.

The Mystery Shopper program was tested in six cities across Mexico: Zacatecas, Mexico City, Guadalajara, Merida, Monterrey, and Puebla. In Zacatecas, each Modelorama was tested monthly. In all other cities a sample of 400 total Modeloramas were used and each was tested at least three times each year.

For each Mystery Shopper excursion, D&N reported back the time, location, and name of the Modelorama; whether or not it was effective; whether or not they asked for identification; whether or not alcohol was sold; and whether or not point of purchase (POP) material about underage sales was posted. The name of the person who carried out the visit and the approximate age and sex of the store manager or employee in charge were also recorded.

The overall cost of the program in 2018 was approximately $33,000 USD. The monthly Zacatecas visits for roughly 50 stores cost around $9,000 USD while the national program of four annual visits to roughly 400 stores across the five additional cities cost around $24,000 USD. 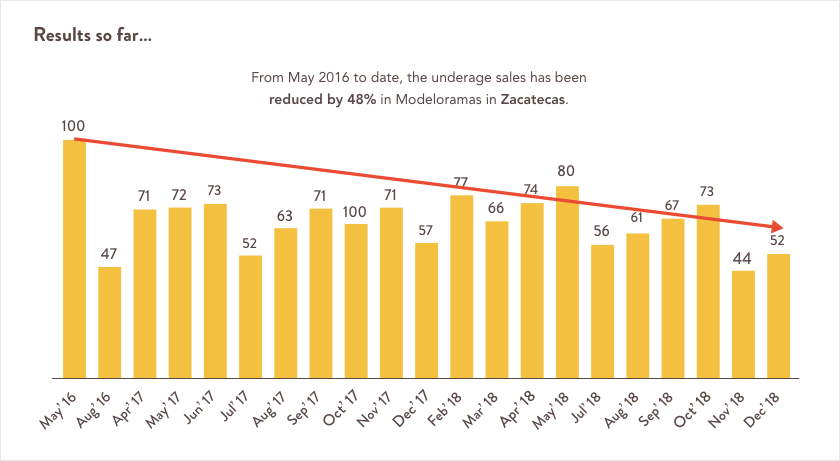 From May 2016 to date, underage sales of alcohol have been reduced by 48% in Zacatecan Modeloramas [Figure 1]. There has been an overall decline in sales to minors in other cities as well. Across the 450 stores sampled, the number of Modeloramas that failed the Mystery Shopper test dropped from an average of 72% in March of 2018 to an average of 38% in November of 2018.1

As a result of the Mystery Shopper program, a new training was developed for Modelorama managers that focuses specifically on the legal and public health consequences of underage drinking. Managers now receive consistent SMS communication about the risks and consequences of selling alcohol to minors and the “TRAX” program is used to ensure that all Modeloramas have “No Underage Sales to Minors” POP material.

In Zacatecas, a program that trains promoters to go to each establishment that sells alcohol and provide a roughly 10-minute crash course on the state’s alcohol laws has been rolled out in conjunction with the Health Ministry, the National Commission Against Addictions (CONADIC), and the University of Zacatecas.

The Zacatecas City Pilot wants to eventually test other vendors, like convenience stores and mom and pop shops, in addition to Modeloramas.

As a result of the program, the Zacatecas City Pilot has discovered that:

The implementers also have some recommended best practices for those who want to try a similar intervention: